Catania, the regional capital of the homonymous providence, is the second largest city in Sicily,  and eastern Sicily’s largest industrial center. The primary center is the islands capital, Palermo.   Catania has been important setting in Sicily since the 700s CE. Not only is it the current site of the Sicilian Silicon Valley, Catania was the home to the island’s first university and a major cultural contributor during the Renaissance.  It has experienced some wear and tear with all of the travelers that have come through Sicily, and being at the base of a volcano.

The city has been destroyed, sacked or ruined at least nine times, several times because of eruptions of A Muntagna (don’t call it Mt Etna, but rather just ‘The Mountain’) and always, optimistically or call it what you will, built on the same spot.   Many of the city’s buildings date to the 18th century and feature dark gray volcanic stone.

The trip to Catania was ad-hoc. There was time to kill, the city  has a couple of Unesco heritage sites including its Piazza Duomo andall the guide books suggested it was under appreciated by tourists because of its industrial role.  A quick train runs from Giarre to Catania regularly during the week and it is easy to get to some of the bigger sites.

One of the main sites of the city was the Pescheria di Catania – a giant outdoor fish market. Unfortunately, it was Good Friday afternoon, and almost all the fish shops had been bought out and were closed up.  Like mainland Italy, Sicily is strongly Roman Catholic. However, there was one stall open with man in a white apron singing in a lovely tenor voice.  Definitely in Italy now, Toto.

The center of town holds the Duomo – The Church of St Agathe and also a very cool statue of an elephant, made out of, yep, volcanic rock! u Liotru, the elephant is the guardian of the city and stands with a Obelisk on his back.  He dates back to ancient times, and is said to represent a lot of the same things Ganesh brings.  One last note on the elephant – legend has it that the originally version was neutered, and the local male population took exception to this, and a second version erected. 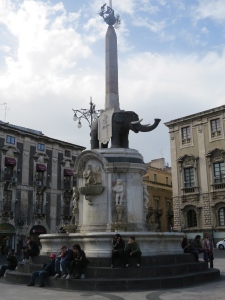 © Laura Kirkpatrick and Azimuthscompass, 2011-present. Unauthorized use and/or duplication of this material without express and written permission from this blog’s author and/or owner is strictly prohibited. Excerpts and links may be used, provided that full and clear credit is given to Laura Kirkpatrick and AzimtuhsCompass with appropriate and specific direction to the original content.