Cairo is expanding, and that expansion includes a recently opened American University in Cairo’s New Cairo campus.  The campus is home to all undergraduate and graduate programs, with a student body of 5,000 or so students, – 85% of which are Egyptian – and 1,500 faculty, making it the largest university in North Africa, according to the Times.  It lies on a plateau East of Cairo (away from the Nile) and faces the desert on three of its sides.  The fourth faces New Cairo, what appears to be the Egyptian equivalent of McMansion-ville.  The new campus still has a new car smell to it, and does sort of appear as a movie set on the edge of the desert.  Even the buildings, none of which are taller than three stories, have architectural features that basically scream historical North Africa, almost as if conjured by Dreamworks.
View Larger Map

It also features one of the hippest student bodies I’d seen in a while.  (Sorry, CU!) I got to spend the morning crowd watching at the New Campus, after riding a shuttle out from Maadi. The standard uniform for girls was straight leg or cigarette jeans, or jeggings, (on all body types) boots or sockless ballet flats, a tight shirt and loose outer layer, accessorized by a big over the shoulder bag – most often Longchamp (or knockoff) or some other premium brand, or fancy large leather bag  – and amazing hair.  I started to notice all this because of the number of Uggs on campus – my first thought being why do you need lined boots in the desert, though despite it being the desert it was significantly cooler than Cairo? My second was the realization that Egypt is a heck of a lot closer to Australia than, say, Manhattan or Cleveland.  My other observation – this was my kind of place: shirts weren’t tucked in, and all the shoes from athletic looking mary-janes and ballet flats to over the knee boots were flatly heeled.

The young men look like young men everywhere – standard uniform of t-shirt and jeans. I think they do not stand out to me as much because they are not working with as much of a confine in terms of what is appropriate as the women are.    My first week here, I met a university professor and his rock star wife who were convinced that Western fashion designers are merely picking up trends started in North Africa.  I’m not sure I believe that, but there are some seriously stylish women here.

I also am completely jealous of the hair of women here, apparently there are no bad hair days when you are Egyptian. Very few women at the University wear a headscarf, and most of those that opted to did so with incredible style.   I saw a woman in cotton knit harem pants, a tunic gartered by a large leather belt, a cropped denim vest and a Pucci headscarf carrying a very nice large leather bag.  Brand names and status symbols count here – the most common unisex accessories I saw were the iPhone and a status symbol watch. 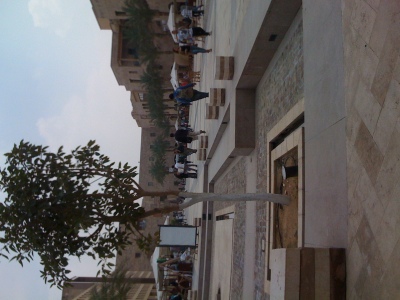 The women at University are so different from those I’ve seen on the Metro, where the majority of women are wearing hijab, and a good number sport burqas with the panel covering the face.  Those that just wear the hijab usually have a super tight layer on – think scuba suit, but made of spandex – under several other layers.  These women layer better than anything True Prep could ever come up with.  As opposed to the women at the University, the women on the metro are skirted down to their well covered ankles, occasionally showing peaks of jeans underneath their beyond-prairie skirts.

When you ride the metro in Cairo, it is recommended that women ride in the ladies only cars, usually about three cars in the middle of the train.  Every stop has two signs reading “Ladies” between which these cars will stop.  The shuttle out to the University  was much more integrated – with young men and women even sitting next to each other on the two a row seats.  Though, unlike the metro, the men stood aside and let the women board first.  I could get used to that.  The metro is a free for all, and especially the exits.  I have yet to get off a train either in Downtown Cairo, or any of the Maadi stops without being stepped on, elbowed or pushed.  Across from me on the shuttle were two young college students (who caused some of the graduate students and others to comment “Oh to be 18 again,” which made me laugh considering it was coming out of the mouth of 26 yr olds.  Oh to be 26 again!)  This was my first exposure to the breadth of western culture in these kids.  The young man, on hanging up his phone, muttered loudly, “Jesus!” as an oath.  The irony of which made me laugh.  He then compared a photo of his very pretty seatmate to Snooki on Jersey Shore.  Clearly, he needs to season his game.

© Laura Kirkpatrick and Azimuthscompass, 2011-present. Unauthorized use and/or duplication of this material without express and written permission from this blog’s author and/or owner is strictly prohibited. Excerpts and links may be used, provided that full and clear credit is given to Laura Kirkpatrick and AzimtuhsCompass with appropriate and specific direction to the original content.